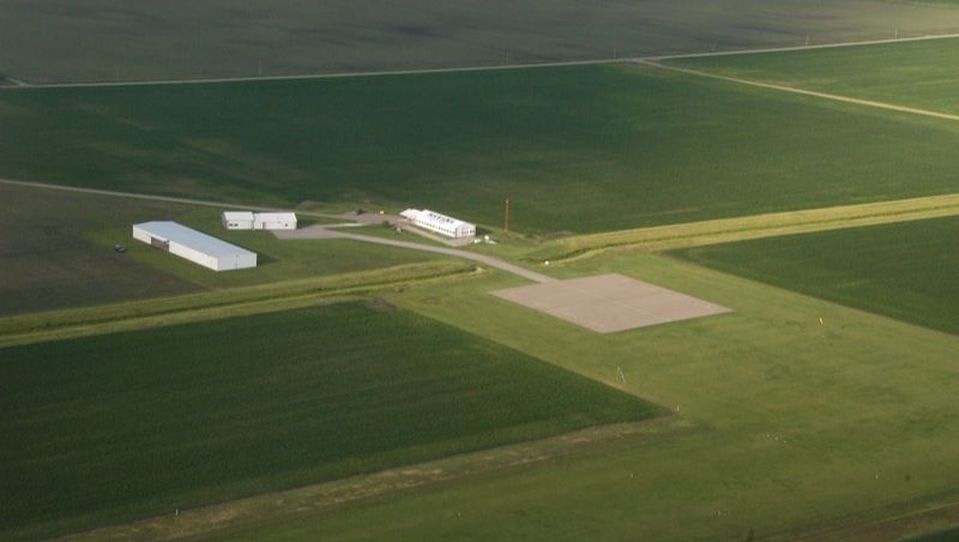 In the 1950's what is now the airport grounds had been the National Bureau of Standards' Long Branch Field Station where acres of antenna arrays were used for planetary radar astronomy and meteoroid research employing pulsed transmissions of up to four million watts.  This kind of radar astronomy wasn't exactly an airplane-friendly technology, so the facility was surrounded by a 1 nm radius restricted area.  In fact, the equipment operated so hot that the main building wasn't equipped with any kind of heating system.  After the experiments had been concluded, the equipment was removed and the land transferred for explicit use as an airport by the U.S. government to the Havana Regional Port District.  It soon became the Havana Regional Airport.

A small FBO grew in the mid 1980's, with eight to ten aircraft tied down, but after experiencing wind damage a few years later, the airport slowly fell into a state of abandonment.

In the early 2000's, two gentlemen of nearby Petersburg, Harvey Tapscott and Tom Galassi, rediscovered the airport.  Using their own funds and a generous amount of labor, they began to reclaim the airport from nature.  Trees were cut, roofs patched, raccoons relocated, the runway groomed, and buildings renovated inside and out.  Seeing the positive changes in the airport and grounds, more volunteers arrived.

With an influx of state and federal funds, more improvements were made.  Harvey Tapscott served as airport manager from 2006-2010 with Tom Galassi as his assistant.

Beginning in 2006, modern hanger buildings were added featuring electric doors, super lighting, and concrete floors were built using local, state and federal funds obtained by the airport.  It immediately filled with aircrafts.  That same year, EAA volunteers finished the interior renovations which consist of a modern conference room and a fully-equipped kitchen.

In 2007, the Illinois Division of Aeronautics took notice of the improvements and positive changes that were happening, and the Havana Regional Airport was awarded the Class B Airport of the Year by the State of Illinois Department of Aviation for airports with runways less than 4000 feet. A fuel facility was added in 2010 and all-new runway lighting in 2012.

Today there are sixteen paved-ramp T-hangars with eight more scheduled for completion in early 2020. It enjoys and active EAA chapter and the many activities associated with their volunteerism.

Showers and expanded washroom facilities will be completed in 2019!

Havana Regional Airport Board of Directors

The Board of Directors conducts its regular meetings on the second Friday of each month at 8:30 AM at the Havana Regional Airport.
The dates are announced and the meetings conducted in accordance with the Illinois Open Meetings Act.
For more information or to confirm a meeting date, please call Board president, Bob Martin, at 309-518-4445.